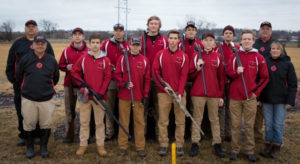 Mount Michael is a member of the Eastern Cornhusker Trapshooting Conference (ECTC) which organizes the high school shoots.  The season begins the middle of January and concludes with the state shoot in Doniphan, Nebraska the first week of May.   There are a total of 6 competitions, an all-conference shoot and the state shoot for a total of 8 meets.  Most shooters use a 12ga. shotgun and practices are held at the Valley Trap Range three times a week during the season.  The competitions are held on Saturdays at various ranges around Omaha and Lincoln.

Trapshooting is a sport requiring hand to eye coordination, focused concentration and mental stamina.  Teams consist of “squads” made up of five shooters.  Each shooter shoots 10 clay “birds”from five different positions (called “the line”) for a total of 50 shots The shooting is done from 16 yards behind the trap house.  The score of “hit birds”is then halved and the shooter shoots the next 50 targets from this yardage behind the trap house…this is called the handicap.  For example, if a shooter shoots 48/50 @16 they will then shoot the next 50 from 24 yards behind the house for the handicap round.  The scores are then tallied and three groups of awards are given:  16yd High, Handicap High and High Overall (all 100 targets).  These three awards are given to teams and another group of awards is given to individuals.