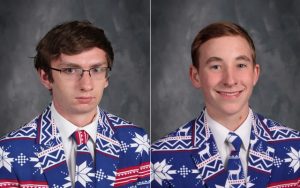 Each year the Omaha World-Herald asks Nebraska school counselors to contact students who have an SAT score of 1390 or higher or an ACT score of 32 or higher. These students must fill out an extensive application that includes all their classes, grades, and service. These students represent the top 4% of Nebraska’s seniors academically. This year Mount Michael had 19 students qualify for the distinction, which is 34% of the graduating class.

The seniors below are All Academic Honorable Mention. They are in alphabetic order by last name, left to right.