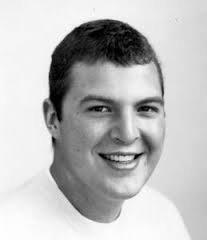 Two buildings on Mount Michael’s Campus memorialize DJ Sokol. Known to classmates as “Dave” and to family as “D.J.”, he excelled in the classroom as well as on the football field and basketball court.  His classmates and the entire school community enjoyed Dave’s engaging and energetic personality.  During his sophomore year, Dave was diagnosed with Hodgkin’s Disease.  He faced this challenge with remarkable grace and aplomb.  Dave remained committed to his studies and connected to his classmates despite the rigorous treatment for this cancer.  He graduated in May of 1999.  Sadly Dave lost his fight with cancer about three weeks after graduation on June 11, 1999.  Dave is remembered for the friendships he nurtured and the courageousness with which he faced his cancer.

The Video below was created by Skyler Davis ’19 for the opening of the David “DJ” Sokol Learning for Life Building in January 2018.   Those who knew him reflect on his life and character.

Below is an article from “The Mount” republished on the Mount Michael News Blog November 23, 2015

DJ Sokol Class of 1999 : The Life of an Extraordinary Mount Michael Student
Matthew Lee Dugick | In-Depth Editor for THE MOUNT

DJ Sokol, better known as David Junior to his family, is a name seen on several buildings around town including: the DJ Sokol Arena, which is a student recreational center for the students of Creighton University. But who is DJ Sokol?

DJ is a Mount Michael alum, who graduated in the class of 1999 and soon his name will be on another building, The DJ Sokol Learning for Life Building on the campus. However it is a good bet most students don’t know much more than the name.

According to his father, David Sokol, DJ had a mind of his own coming out of grade school. He was invited out to Mount Michael to look at the school and he really liked it, prompting him in April 1995 to attend Mount Michael.

After being out at Mount Michael for a couple weeks his father remembers DJ coming home, and saying “Oh my gosh, this is a disaster I should have not made this decision.”
But his parents believed that since he chose Mount Michael he should have to stick it out. Come Thanksgiving break, Da­vid Sokol asked his son if he still wanted to be at Mount Michael. He remembers clearly his son’s response. DJ looked at his dad, “He gave me this unbelievable look which was ‘what are you talking about, this is the best school ever, these guys are my brothers, and my friends I would never leave this school…After four weeks, he was 100% sure this was the place for him.” David Sokol said.

DJ would be a typical high school student, until he began his battle with Hodgkin’s disease. For almost 18 months he would keep this silent from his classmates and teachers.
David Sokol described DJ as caring person who invested himself in everyone else, including less popular kids. He knew they would become more accepted amongst his friends if he hung out with them.

“DJ had two unique things about his personality. First, he was very easy to get to know; he had an open personality and was always more interested in you, than he was himself. He immediately was engaging himself in the other person. Sec­ondly, DJ had the kindest spirit out of anyone I have ever met.” David Sokol said.

There were “numerous” times that the Sokol basement would be filed with five to ten students from Mount Michael that didn’t have family in Nebraska. After many basketball games, DJ would invite the whole team, fans and family of Mount Michael out to his parents’ house to enjoy each other’s company.

He was also a typical student; he had some favorite teachers such as Abbot Michael, Fr. Louis, and Brother Mel. His first two years at Mount Michael he became a better student and was molded to care more about his grades and his study habits. He played football and basketball and admired Coach Kane.

During his last two years he could not play sports so he helped with the football and basketball programs. Especially his junior and senior year his classmates became his broth­ers.

An example of DJ’s love for Mount Michael and his brothers could be seen through his unselfish acts. Because of the chemo, he was weak and could not attend school the day after a treatment session. DJ would ask his mom to help make cookies for all the boarders, coming out to school with a mouth mask to deliver the cookies.

DJ did reach his goal and graduate from Mount Michael, unfortunately about two weeks after graduation he lost his battle with cancer, June 11, 1999.

True to his passion for the school, when DJ went into his last treatment he asked his dad that if he was to pass away, he wanted to be buried at Mount Michael.

DJ was an amazing example of what Mount Michael is about. He was always looking out for others and the betterment of those around him. He may be gone but his legacy lives on. Once A Knight Always A Knight.