New Coach and Director of Fellowship of Knights program 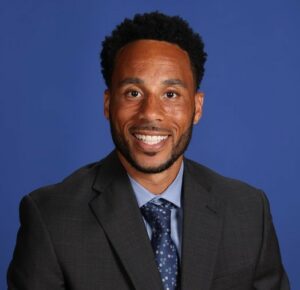 Mount Michael has hired Allen Burrell Jr. as Director of Student Advocacy and Outreach. He will also serve as the Director of Fellowship of Knights program. Burrell will also serve as the new Head Football Coach and Assistant Track Coach. Burrell currently works at Creighton Prep as the Director of Student Outreach and Advocacy as well as an Assistant Varsity Football Coach and Track and Field Coach. Since 2016, he has coached wide receivers in football and the sprints and jumps in track and field at Prep. Prior to Creighton Prep, Coach Burrell was an Assistant Varsity Football Coach at Millard North from 2008 – 2015.

Coach Burrell was born and raised in Aurora, CO. His collegiate athletic career began at the University of Nebraska-Kearney as wide receiver as a true freshman where he set a school record for catches by a freshman (36). Burrell then transferred to North Dakota State University to continue football as a wide receiver and kick returner as well as to run track. He is a four-time NCAA Division II All-American. Burrell graduated from NDSU with a Bachelor’s degree in criminal justice in 2005. He continued his passion for football by joining the Indoor Football League playing for the Omaha Beef, Sioux Falls Storm, and the Council Bluffs Express.

“We are excited to have Allen take the leadership role with our newly created Fellowship of Knights program. For athletics, he brings a lot of experience, heart and enthusiasm to his coaching and the opportunities with our teams here at Mount Michael.” said Dr. David J. Peters, Ed.D