Murmurs ran rampant through the senior dorm on a Monday night. “Who’s the new dean?” “He looks kind of strict.” “It’s Counselor Tommie!” “Isn’t that the guy who’s really fast?”
Those murmurs were quieted at prayer that night as new assistant dean Thomas Feichtinger ‘12 introduced himself to the senior class. After three years away from Mount Michael, he has decided to return to the community.

“I never quite could get away from Mount Michael,” he said. “Whether it be camp counseling or just coming around, now that I’ve moved back to Omaha, it was just another chance to come back.”
Feichtinger returned at the right time, as a position opened up for another assistant dean after his high school and college classmate Michael Collins ‘12 left the seven day dean position to enter into nursing school. 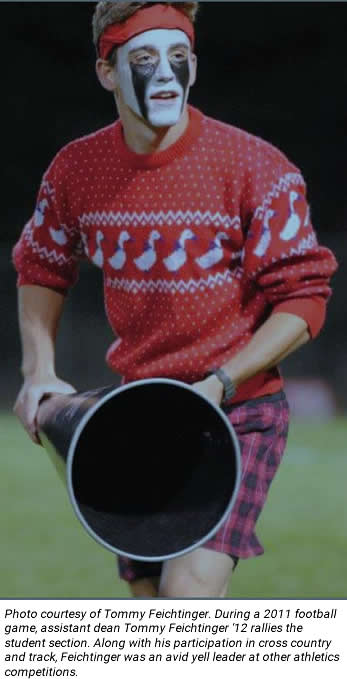 “It’s always good to have two assistant deans,” dean of students Dave Cormier said. “We’d been getting by with one, but especially with Mr. Collins leaving, we need the extra help.”
According to Cormier, Feichtinger has “jumped right in” to his duties as a dean.

“He wasn’t hesitant. He fits in the dorms, and he had the self-assurance to impose rules right away,” Cormier said. “He’s got great energy and responsibility and passion for Mount Michael.”

That passion for Mount Michael is something Feichtinger possesses to this day. Some of his greatest memories include learning from Mount Michael teachers.

“I loved all my teachers; I thought they were incredible and smart and talented,” he said. “I will still tell stories about Mr. Roshone and all the teachers I had. I was in constant awe of how good of an education it was.”

Feichtinger’s impression of Mount Michael teachers, especially English teacher John Gathje, played a role in his decision to study education in college. Even though he eventually pursued other areas, he is now considering teaching again, which is part of the reason for his return.

Along with evaluating his interest in teaching again, he also plans to help out the track and field team as an assistant coach this spring.

“I’m most excited about that,” he said. “I’d rather be coaching than probably whatever else I end up finding myself doing. I’m more excited to coach than I am to dean. I like deaning, but you’re more apart from the experience, and with coaching it’s more hands-on. I think that’s what I’ll be fulfilled by most.”

Close relationships with students are not only what he looks forward to most, but they are also what he cherished most as a student at Mount Michael.

“I lived with roommates all the way out of college,” he said. “I miss having friends around all the time. It was a five day sleepover with all my best friends. I just like being around the students again, because I miss Mount Michael, always.”