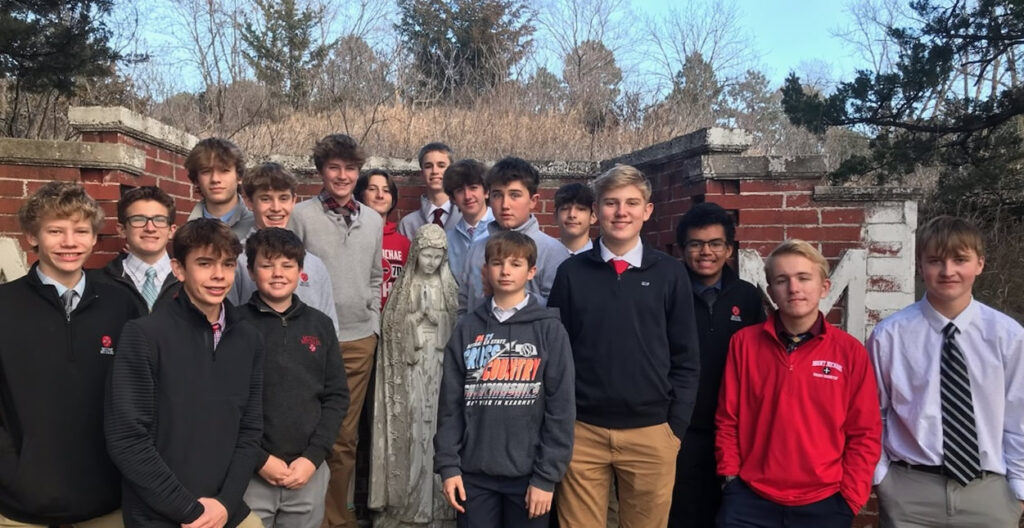 This past semester, I have been offering an opportunity for our freshmen in our school to become more aware of the history of Mount Michael, its land and its people. It has also been a way of being safe in regard to the Coronavirus— most of the classes take place outside or walking to the subject of the historical destination— first chapel, Mount Michael cemetery, Journey’s End Farm, Rex Olson’s House and Barn, the Heritage Room, the Casket Room, the Marian Shrine, the Bell Tower, etc, etc.

This MM History class is not an academic one. There is no grade given in this class. However, I would guess that some of these students will remember some of the trivia of the history of MM — both of the abbey and of the school. To actually experience the sensation of the commanding view of the Elkhorn River Valley below MM, allows one to totally understand why the monks of Conception Abbey chose this location for a new foundation — Mount Michael Abbey and School.

Although these freshmen, the class of 2025, are separated by many years between the original monks and the people during the founding of MM, I have found that there are some who have some connections. Oliver Sorensen is a great nephew of Br. Andrew Sorensen; Jack Dewhurst had a relative in my freshmen class, in the class of 1967,; Thomas Tagel’s grandfather, Joe Tagel, was buried in a MM casket, and Thomas was in our chapel when our Marian Shrine was rededicated to the Peetz family; Ethan Moline’s grandmother was buried in a MM casket as well. The list of connections goes on and on.

On that Wednesday in Advent, I also felt that I needed to play a part in keeping the memory of the founders of MM and the former monks alive. Mount Michael is indeed a unique place. The day we walked to the Marian Shrine and then sauntered up the back hill to where alum Trevin Detwiler ‘19 constructed a huge cross for his Eagle Scout Award, we all looked back at the view spread out below us.  I remember saying to them, “What other school could give you all of this?” They readily agreed. We took a photo to remember the moment and to recall how Fr. Thomas Allen and his Fatima Club had worked so hard to create the shrine. To my surprise, every freshman had already been to the shrine at one time or another. They just did not know all the history behind it and those who created it.

Every freshman of 2025 should be able to tell you who owned the land before it became Mount Michael’s — Rex Olson. They should be able to tell you what Rex endearingly named his farm — Journey’s End. Are these important facts? Are any of the other facts important about the history of MM? Perhaps not! But I do believe there is some appreciation of where we came from and what went before us. I also felt that at least some of the freshmen felt a type of appreciation to be able to be a part of this heritage and this beauty.  I am hoping that the founders of MM will never be forgotten, and that all their labor will always be appreciated.

I will have to admit that it has been a rather enjoyable experience with these freshmen. There is never a dull moment or a lack of energy. And I also have to admit that I am looking forward to next year. There are many more places to see and more history to discover the history behind those places, and, ever so, more people with whom to connect.