The nine o’clock evening study hall bell rings and stu­dents rush around the Benedict building to partake in var­ious activities. Most rest in their rooms, but new student Jake Moore ‘21 follows Nick Wehbe ‘21 and Ian Miller ‘20 down to the wrestling mats.

“Jake’s a good kid,” Wehbe said. “I’ve only known him for a couple of days, but I can already tell how nice of a guy he is and how hard he works in school and wrestling.”

Moore participates in multiple activ­ities and hobbies: in the summers, he is a photographer and counselor at Camp Kitaki in South Bend, Nebraska. 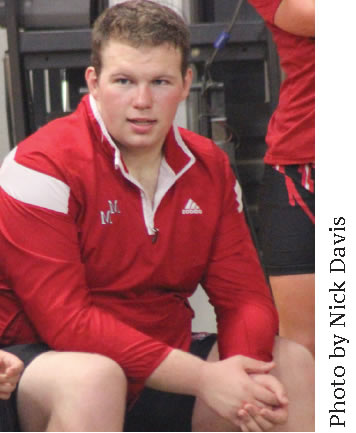 “I do chores and lead activities such as canoeing and rope swinging at the lake,” Moore said. “I also take some cool pictures on the camp’s Flickr page. I love taking pictures of nature.”

Growing up, Moore attended We­stridge Elementary in Elkhorn. He par­ticipated in karate, football, basketball, and wrestling. Moore especially enjoyed his time in choir and show choir.

“I had so much fun going to all the dif­ferent competitions and seeing what routines and perfor­mances other schools were doing,” Moore said.

Moore then went to Elkhorn High, competing in foot­ball and wrestling and taking advanced courses.

“By December of last year, I just saw how packed it was,” Moore said. “My grade was bigger than the whole enroll­ment [at Mount Michael], and I didn’t get to know very many people. Athletics were extremely selective with lots of competition and cuts, so I wanted more opportunities.”

Within the next few days of December, Moore shad­owed at Mount Michael and completed his recommenda­tions and application.

“Jake was a very easy acceptance,” director of admis­sions Thomas Maliszewski ‘13 said. “He displayed all the qualities we look for, be­ing a model student with fantastic grades, and I felt he would fit in well with the ju­nior class.”

By Christmas break, Moore was accept­ed and was practicing with the wrestling team.

“The process of transferring his testing profile took a bit of time with the NSAA, but he has transitioned well into our team,” wrestling coach Bob Sullivan said. “I can tell how much Jake loves the sport by how hard he competes and how he likes learn­ing from other guys and other aspects.”

As the semester begins, Moore is ready to ‘embrace’ this new phase and change in his life.

“Boarding and going to school here is definitely going to help for college to mature and develop without my parents, and I’m ready to jump in and go for it,” Moore said. “I wanted more of a family setting rooted in brotherhood with people who care and want to be here.”

Wehbe was in a similar situation last year, transferring in at semester.

“It’s so easy to fit in here,” Wehbe said. “My advice to Jake would be to not worry too much; he is going to do well because everyone at the school will help him to do the best he can.”