After creation of esports team, athletes compete in early matches

In response to significant interest, dean of students Dave Cormier decided to create an esports team, which had its first meeting on Jan. 13. The team began competition play in the winter open with the High School Esports League the week of Jan. 19 with a 13-9 record.

“Esports hadn’t been brought up before, but I was aware of colleges and some high schools adding it,” Cormier said. “David Drews asked about a team being made and now we’re really working on it”

This interest prompted Cormier to send out a schoolwide survey. Out of the 107 students who answered the survey, 80 expressed significant interest in the team.

For David Drews ‘22, this is exactly what he wanted. 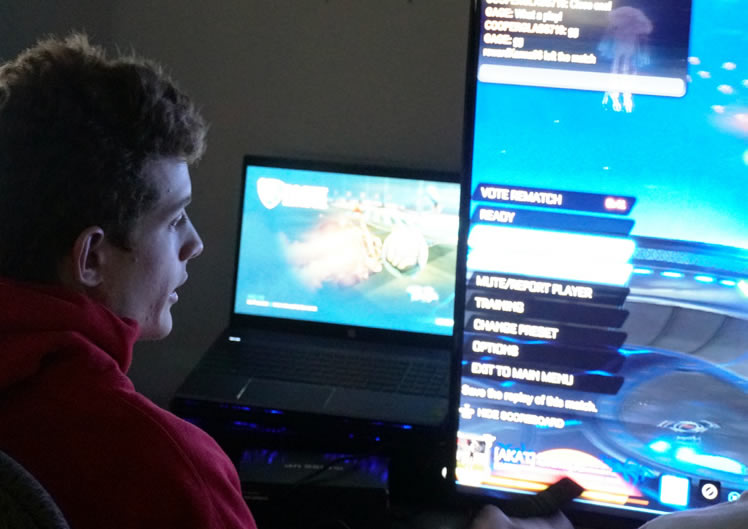 Cameron Detwiler ‘21 plays Rocket League in the esports room. The Rocket League team of Detwiler, Brown, and Lydle is undefeated.

“I thought we needed an esports team about a year ago, but I never did anything because I didn’t think anything would come of it,” Drews said. “However, Ms. Sullivan told us Mr. Cormier plays video games and I thought ‘Why not, it couldn’t hurt.’”

With this sport being new, everyone involved is trying to work out the kinks, such as how matches work and how best to form the various internal teams.

“Right now I don’t exactly know what to do, so I’m educating myself on the basics,” Cormier said.

“It’s fun to be able to get it going here and show off what we’ve got” Detwiler said.
To help build a sense of team the group has taken over an old office in the Benedict Building.

This room features huge flatscreens which were loaned by the robotics program, as well as several consoles and PC’s that students on the team have brought in. These machines have been added to the network with Dr. Rzyemk’s help.

The room is often filled with players practicing or competing after school, it maintains a lively atmosphere.

How this new activity will fit in to the rest of the activities culture here is still being worked out.
“The question is if physical sports and esports will come into conflict. We want it to be accessible for everyone, so we’re playing around with the issue right now,” Cormier said.

For now, esports will not be replacing any physical sports this year and “ideally won’t replace the fall sport requirement in the future.”

Many students expressed enthusiasm over the new opportunity.

“The nice thing about esports is that there’s something for everyone. There are a variety of games to play, so everyone can find one that they’re good at,” Callan Farrell ‘20 said.

By all accounts, Drews, who has formed a team for CS:GO, couldn’t be happier.
“I want to play video games for my school with my friends, and esports was the way to do it,” he said.