From physics to data science

“I was living in a bubble,” Antonelli says. “I was keeping my head down and following the same path as everyone around me instead of taking an honest look at my future.”

Every year, a few hundred students like Antonelli graduate with PhDs in particle physics. And every year, only about a dozen permanent positions open up at universities and research institutions. As Antonelli and his peers navigated cycles of applications and rejections, he was hit with a hard truth: Most PhD physicists will leave academia.

Like many of those physicists, Antonelli found his way to a career in data science. It can be a challenging transition to make, especially when students like Antonelli find themselves building a large part of their identity on the idea of staying in basic research or academia.

Symmetry checks in with Antonelli and three other physicists who made the leap to data science. 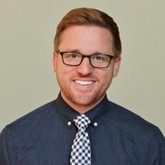 As a junior in high school in 1999, Antonelli watched as his physics teacher dropped a bowling ball and an egg simultaneously, expecting the heavier object to land first. They smashed into the ground at the same time.

“It was like the scales had fallen from my eyes,” he says. “It opened a new realm of understanding that was not accessible by intuition alone.”

From that class forward, Antonelli was hooked. He pursued physics with dogged persistence.

“I wanted to dive as deep as I could,” he says. “No other subject held my interest as much. I wanted to do everything I could to one day become a physics professor.”

As a talented student, Antonelli was a big fish in a small pond. But when he started a particle physics PhD program at the University of Notre Dame and began doing research on the CMS experiment at the Large Hadron Collider, he became acutely aware that he had entered the ocean.

“By the time I got to CERN, I was no longer the best at physics,” he says. “I was surprised how hard it got. The depth of the mathematics pushed me to the limits of my intelligence. It was a great and humbling life experience, understanding where I fit in the world.”

Antonelli pushed through the challenges toward the goal he had set for himself in high school. But as he entered his fifth year as a postdoc, he began to question his choices.

“At the beginning, the competitive culture motivated me,” he says. “It was a blast: working all day and into the evening with all these brilliant people, trying to shine.”

But in the later stages, he says, he started to see how that same culture was driving him and his colleagues to neglect other parts of their lives. “There was also the subconscious awareness that we were all competing for the same small pool of permanent jobs, and this became a huge source of stress.”

Antonelli says that competition started eating away at the camaraderie within his community of physics friends and coworkers. “I’d watch friends get interviews at places where I had also applied, and it was really difficult to celebrate their achievements,” he says. “Within the academic job market, there are real challenges, real disappointments and real jealousies between friends. It can really bring out the worst in everybody.”

Antonelli started looking for another option, but he had never considered how his skills might apply outside academia. Even thinking about it felt like abandoning a dream.

“Because the field draws people who are motivated and intelligent, it fosters a culture of giving your whole self to your job,” he says. “And I was no exception. I had spent my whole life on this path and had invested so much that I felt like I would be a failure if I went in a different direction. So much of my personal identity was wrapped up in becoming a professor that it was painful for me to give that up.”

Then Antonelli attended a job panel at a physics conference that gave him a new window into the world outside of physics. The moderator for the panel said she found it unconscionable that students in physics were not aware that their peers who had left the field were generally very happy with their work—and making two to three times as much money.

“I had never compared the academic career lifestyle with that outside academia,” Antonelli says. “And it turns out, 70% of the job description for a professor did not interest me at all. It had been my goal for so long that I had never evaluated if it was a good fit for me.”

In 2017 he participated in the Insight Data Science Fellows Program, a seven-week program run by a former member of the ATLAS experiment at the LHC that helps scientists transition from academia to data science. Immediately afterward he found a job in health care.

Antonelli reviews data from hospitals to compare their performance and identify opportunities to improve their quality of care. One of his latest projects involves helping hospitals understand if they are giving equal treatment to different socio-economic groups.

To physics students and postdocs considering making the move to data science, he says, “The world and your career opportunities are so much broader than what they are inside academia. You have highly valued tech skills, and you can take your favorite part of your job and find someone that will pay you to do just that.”