For those that see Owen Stricklett ‘24 in the halls, they might not think much about his quiet, subdued demeanor. But once he is in a familiar setting surrounded by his friends and passions, he lights up with talent. 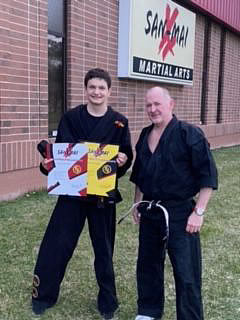 “I have known Owen for about eleven years, and his personality can be described as funny, passionate, and confident,” Aidan Farrell ‘24 said. “He always likes to make jokes, and he also has strong feelings about what he likes and enjoys to pursue them.”

One familiar setting where he embraces these “strong feelings” may come as a shock to some: Tae Kwon Do.
Beginning at age six, Stricklett showed an interest in the art after seeing movies such as “Karate Kid” and meeting friends who had enjoyed it. Stricklett’s parents decided on the program at San Mai located between Bob Boozer Dr. and West Center Rd.

“We were impressed with the instructors who offered several types of classes for different age groups,” Rachel Stricklett said. “He has attended two to three times a week for years, and each of these classes teach fundamentals that build on each other over time.”

The San Mai classes consist of different forms to master. Some of these include learning techniques, sparring competitions, and kicking boards and bags. Stricklett has enjoyed the process of improving.
“Within all these different skills, there is a belt program where you have progress checks once a month to see what you have learned and how you can keep progressing,” Stricklett said. “The more you know and take in, the better you get.”

Stricklett currently holds a second degree black belt within his program. In addition to his success as a student of San Mai, Stricklett expanded his role in eighth grade to now be a teacher of Tae Kwon Do.
A couple days a week from 5:00 to 7:30 p.m. Stricklett collaborates with his instructor who he has had since first grade, Master Hollis Dickerson by helping to teach younger students.

“I enjoy the learning aspect, and seeing them progress makes me so happy,” Stricklett said. “Some of the kids have ADHD as well as each person has different learning styles, so it is a challenge to maneuver around their problems. But, it is so fun to learn from my instructor who is very energized and has a great personality.”

Stricklett has not participated in competitions due to his involvement in school and sports. Outside of Tae Kwon Do, Stricklett plays tennis and baseball. Also, attending school at Mount Michael has forced Stricklett to balance the volume of his activities.

“We love that Owen is at Mount Michael because we like the smaller-size school, strong academics, great teachers, amazing campus, and the great kids,” Rachel Stricklett said. “I think it has been somewhat of an adjustment with more homework and a new school and expectations. It requires being organized and structured to get it all done sometimes.”

As Stricklett continues to develop his skills in an array of activities, he hopes to grow and enjoy the time he has at the school.

“I love the community aspect; I feel like we knew who we were before we got to Mount Michael. But, now it is time to experience it and embrace