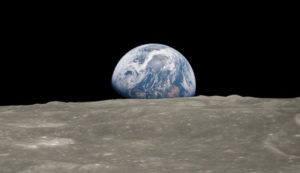 For the last few clear crisp evenings, a beautiful, bright full moon has dominated the night sky. Because of cloud cover, you cannot see it this evening. But the moon is there, so close you believe you might reach out and touch it. Exactly fifty years ago in 1968 on this Christmas eve, three human beings could nearly have accomplished that feat. Frank Borman, Jim Lovell and Bill Anders were the first human beings to orbit the moon. From their vantage point inside the Apollo 8 space capsule, they witnessed something no human being had ever seen before, the earth rising over the lip of the moon.

1968 was not an easy year. In January of that year, North Korea captured the intelligence gathering vessel the USS Pueblo. It’s 83 crew members were imprisoned by the North Koreans. In the spring of that year, Alexander Dubcek began a reform and liberalization of Czechoslovakia. The Prague spring as it was called was crushed when Soviet tanks rumbled into the streets of Prague in August later that year. In Vietnam, the North Vietnamese and the Viet Cong launched the Tet offensive. US and South Vietnamese forces were caught off guard and suffered heavy casualties. On April 5, Dr Martin Luther King was shot and killed in Memphis following a civil rights protest. In April, student protesters occupied buildings and offices on the campus of Columbia University in New York City. In May, student protesters in Paris clashed with police in the Latin Quarter, resulting in hundreds of injuries. In June, having just won the Democratic primary in California, Robert F Kennedy was shot and killed. In August at the Democratic national convention in Chicago, protesters and police collided in bloody clashes in Grant Park. In October at the Olympics in Mexico City, John Carlos and Tommy Smith each bowed his head and raised a black fisted glove on the victors stand. Trouble, turmoil and tragedy dominated the headlines. And then at Christmas, there was the flight of Apollo 8 and this famous image of the earth. So small Jim Lovell said that I could cover the entire earth and all its people with my thumb. So small, so fragile but so beautiful and stunning in the pitch black of space.

Perspective makes a difference. It was as if God chose to remind us all that he sent his only Son to this tiny, but exquisite planet in the vast universe to save us from our own sinfulness – a need which we had all demonstrated quite clearly in that year 1968. While they were orbiting the moon on Christmas eve, the three astronauts took turns reading from the book of Genesis. “In the beginning God created the heaven and the earth. And the earth was without form, and void; and darkness was upon the face of the deep. And the Spirit of God moved upon the face of the waters.  And God said, Let there be light: and there was light . And God saw the light, that it was good: and God divided the light from the darkness.  And God called the light Day, and the darkness he called Night…”

When you saw the televised pictures of the moon from the Apollo spacecraft as the astronauts orbited, those words of creation carried an emotional impact. How fortunate we are to have this good earth to inhabit. Even more, how fortunate we are to have a God who loved his creation so much, that he sent his only son to be born among us, on this tiny orb in the dark and vast reaches of space. When we reached out to touch the face of the moon, God reached out to touch us and to reassure us of his undying love and care for each and every one of us. That is the message which the angels proclaimed when they appeared with stars and the moon in the skies over Bethlehem. The new born Savior of the world has arrived.

Apollo 8 came at the end of one of our most turbulent years, during a season all about peace. Frank Borman later recounted, “We got thousands of telegrams after the flight, but the one that struck me the most said, ‘Thank you Apollo 8. You saved 1968,'” “And I think in a way we helped to heal it.” I hope this reminder of the mission of Apollo 8 will re-kindle our commitment to our faith and to share the good news that the Savior of the world is born. These were the final words from the spacecraft on Christmas eve 1968. And I echo their message: “And from the crew of Apollo 8, we close with good night, good luck, a Merry Christmas, and God bless all of you, all of you on the good Earth.”