Fr. Stephen Recognized as Teacher of the Year

Fr. Stephen Plank OSB, Mount Michael’s French and AP Psychology teacher, was recently recognized as the archdiocese’s metro-area secondary teacher of the year at the Archbishop’s Dinner for Education. 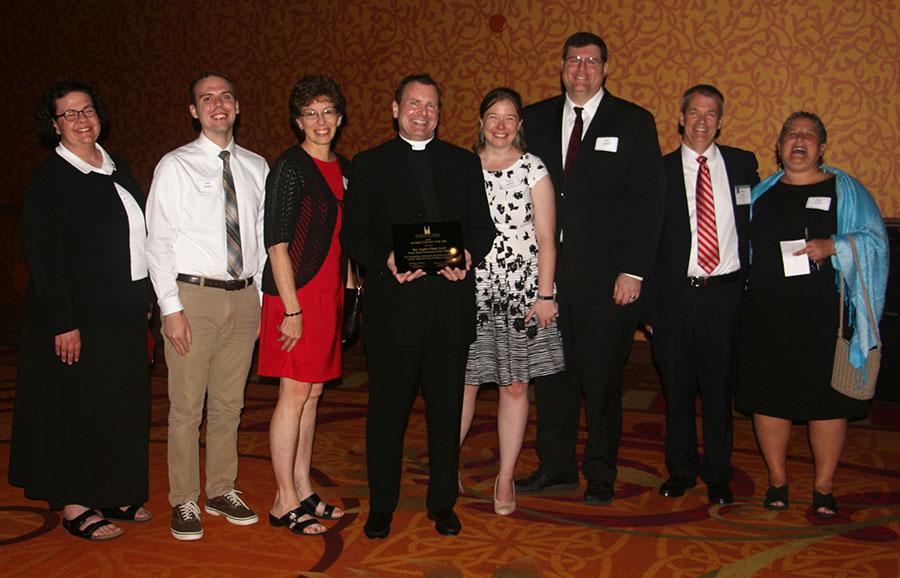 Fr. Stephen with his fellow Mount Michael Teachers and Administrators at the Awards Ceremony

Fr. Stephen has worn a a lot of hats during his 27 years of teaching at Mount Michael. He has taught French, Psychology, Biology, Theology, and Spanish. He also was principal, residential dean, and director of counseling.

Former student and current Mount Michael faculty member Paul Hotovy said, “Fr.Stephen is a superb educator because of his intense preparation of his students,” he said. “My ability to study in France and Mount Michael’s stellar test scores in the National French exam are testaments to his superior teaching and dedication.” Indeed, his students have some of the highest scores in the country on the National French exam and from 1997 to 2014, 69 of his level 1 French students were in the top ten in the state and 23 were national medalists.

For the past ten years, Fr. Stephen has served as an adjunct instructor for the Nebraska Wesleyan Honor’s Academy, a dual-credit program for high school juniors and seniors who want to earn college credit. “Consistently he ranks as one of our best instructors in the program,” said Sara Jane Miles, chair of the Department of Modern Languages at Nebraska Wesleyan.

In his free time, Fr. Plank enjoys reading, watching movies and playing cards with family and friends. He stays very active by walking his dogs, Tempe and Lucky, playing tennis and practicing yoga and Pilates. – taken from the Banquet Program.