It is not unusual for students from Indonesia to choose to go to a high school or college in the U.S. However, Theodore Bunawan’s ‘23 story is unique.

Born and raised in Jakarta, Bunawan is the first Indonesian student to attend Mount Michael.  “I just loved the idea of boarding and getting prepared for college,” Bunawan said. “It is going to be really helpful to get used to it at an early age.”

According to Bunawan, his yearning for studying abroad in the U.S. was “kind of a process.” Many of his friends board at prestigious schools in California.

The transition to Omaha has been easy for him, but he notices differences. 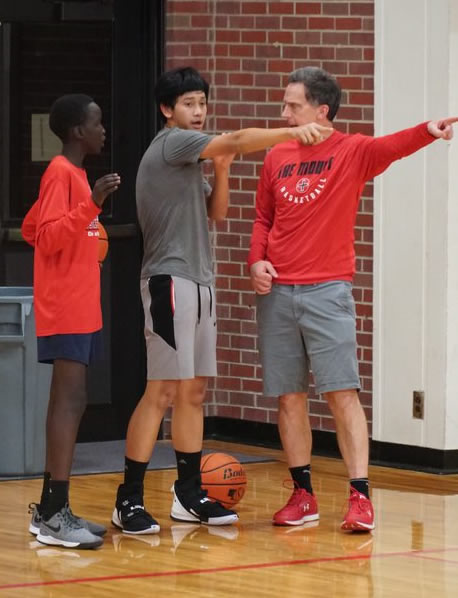 “Jakarta is an urban center,” Bunawan said. “It is the capital, and the town is very populated, so houses are clumped together and traffic is much more hectic.”

Bunawan is the youngest in the family. He has two older sisters: Felicia, who attends Melbourne University in Australia, and Anastasia, who attends Singapore Polytechnic. Outside of being with his family in Jakarta, Bunawan enjoys spending time with his friends.

“My friends and I love to play basketball,” Bunawan said. “Every park has a court there, and we would play from 4 to 7:30 p.m. Other than that, we go to the mall, which has four or five stories, and shop there.”

“The first time I was at Mount Michael was in 1983, back when I was studying English in Omaha,” Toni Bunawan said.

He became immersed in Mount Michael culture when he became friends with Br. Vianney [Richard] Rentmeister in their English class at UNO in 1983. Br. Vianney was a German monk from Christ the King Priory who gave him a tour of the Mount Michael campus.

“I felt the school was very interesting and wished that someday my kid would go there to study,” Toni Bunawan said. “I also visited Mount Michael again last year for a school visit, and I think it’s a great environment and provides good facilities for their students.”

After their visit in 2018, Theodore Bunawan applied and was accepted into the school. Bunawan immediately connected with other seven-day boarders, especially Andrew Wooden ’23.

“We love to play basketball in the gym and lift weights together,” Wooden said. “He is coming home with me for Thanksgiving, and we’re going shopping in Los Angeles and visiting Universal Studios.”

According to Bunawan, the transition has been “very good” so far. He keeps in touch with his family through WhatsApp messaging and FaceTime video calls every night after study hall.
“At first, I expected that living in a room with a bunch of other people would be challenging, but it has worked out because everyone is silent when it’s bedtime,” Bunawan said.

Bunawan has been successful so far in school, earning first honors for the first quarter of the year and the praises of many of his teachers and classmates.

“Theo is very bright and detailed in my class,” biology teacher Dr. Randy Crnkovich said. “I think it shows a lot of maturity of how he can see the big picture of what an education like this can do for him.”