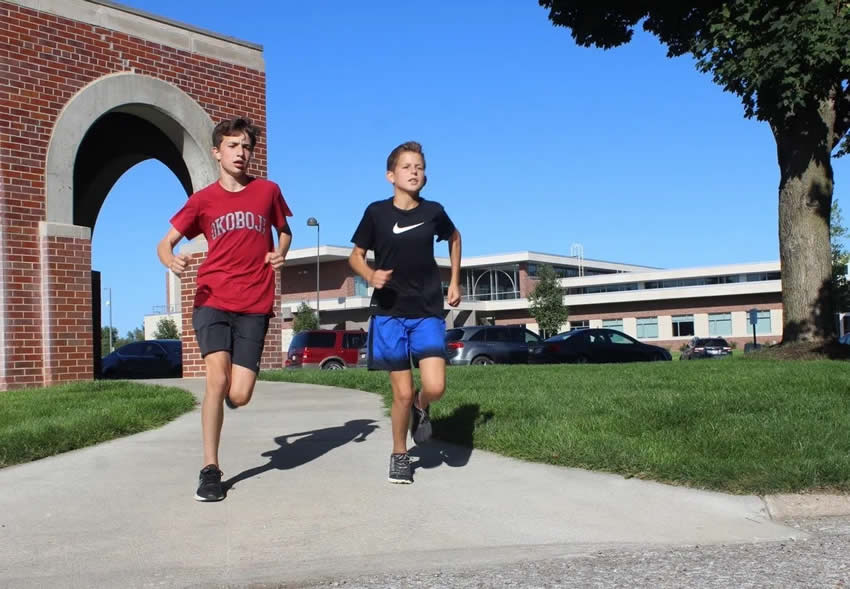 Ryan Quinlan ’23 and Drew Van Haute ’23 return from a training run. Both freshmen are putting in work, holding the top mileage total for their class.

When it comes to sports, the upperclassmen are often looked up to as leaders. They have been there before, celebrated success, and experienced failure. However, underclassmen, including freshmen, should not be overlooked. Over the summer, freshmen Ryan Quinlan ‘23 and Drew Van Haute ‘23, trained hard to prepare for the cross country season.

“I followed the running calendar that Coach Gathje gave us,” Van Haute said. “I was probably averaging about 30 miles a week.”

Gathje provided athletes with a calendar to follow during the summer. The calendar had suggested weekly mileages, slowly growing from 20 miles a week up to 40.

“I usually ran 4 or 5 times a week,” Quinlan said. “On the days that were really hot, I had to get up early in the morning to get my run in.”

Heat was a big hurdle to overcome for all athletes training during the summer. In the month of July, temperatures were often in the upper 90s. Luckily, Van Haute found a way to cool off.

“I spent a lot of time swimming at our cabin this summer,” he said.

Having goals kept Quinlan and Van Haute motivated during the summer. They both hope to be top junior varsity runners.

Quinlan shares some of the same goals, also wanting to run his first race under 20 minutes.

“I’m really just shooting to be a top JV runner this year, and I want to letter,” Quinlan said. “I want to improve at every race and break 19 minutes by the end of the season.”

Running was not the only way that Van Haute and Quinlan prepared for the season, as both runners supplemented their training by doing core work or lifting weights.

“I usually ran to Prairie Life and lifted weights with my brother,” Van Haute said. “When we were done I would run back home.”

With only nine freshmen running cross country this year, most other freshmen opted to play football or tennis. However, both Quinlan and Van Haute were drawn to cross country.

“I’m running cross country to stay in shape,” Van Haute said. “I watched my older brothers run and I wanted to be a part of it.”

Van Haute’s older brother, Sam Van Haute ‘16, was a top 15 finisher at the state cross country meet in 2014 and was also on two state championship-winning teams.

“I definitely feel like there’s a little bit of pressure, but I’m going to do my best,” Drew Van Haute said.

Quinlan is already a seasoned veteran of cross country and track and field, having ran both in middle school at St. Wenceslaus.

“I mostly ran the mile in eighth grade,” Quinlan said. “My best mile time was around 5:30.”

Returning varsity runner John Schroll ‘20 is grateful they put in the time to train this summer.

“I think it’s great that they ran over the summer,” John Schroll ‘20 said. “They have a lot of potential and will be really good in the next few years.”