Video games play a significant role in many people’s lives. Wheth­er they play for sport, challenge, escape, or fun, many have shown major interest in video games. While the major demo­graphic for video game players are teenage boys, there are also others that enjoy gaming, including some of the teachers. 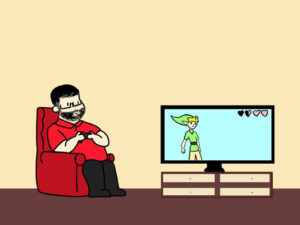 “Video games offer an escape from reality that very few other media offer,” physics teacher Mi­chael Williams said. “You can immerse yourself in an entire world, often a new world every game. You can change your en­tire personality from real life to online, and I think it is an awesome way to relieve stress.”

For algebra teach­er Patrick Mohs, video games are just another part of life.

“I will pretty much play whatever I feel like playing and most of all whenever I have the time to play it,” he said. “I’ll play Mario Kart on my old Super Nintendo or sometimes I will play God of War on my PS4.

For one faculty mem­ber, dean of students Dave Cormier, playing video games is now a joy he shares with students as coach of the Esports team.

Cormier started gam­ing in the mid-eighties when he got the original Nintendo system playing classics like Mario Broth­ers and Legend of Zelda.

“Later on, I got into computer gaming, games like Baldur’s Gate and the original Counter­Strike. I got an Xbox 360 when I was the assistant freshman dean because the freshman dean Mr. Gilligan had an original Xbox and got me back into gaming with Halo and Simpsons: Road Rage,” he said.

Gaming allows for a different way of thinking and comprehensive prob­lem-solving. After a long day of school or work, even the most difficult of games provide a welcome challenge that makes one focus and think differ­ently.

“Some people are wired to enjoy them and I guess I just am; it’s a good way for me to relax and think in a different way,” Cormier said.

For Williams gaming is more than just a way to unwind.

“I grew up playing video games, and many of my fondest memories are of video games,” he said. “Spending the hours upon hours honing your skills to finally beat that one level boss that has been killing you is one of the greatest feelings. After rage quitting for months on end, finally stepping into that level, hearing the boss music for the 1000th time and finally complet­ing that level, what more could a ten-year old boy ask for?”