As junior year arrives so does AP United States History, one of the first AP classes a student can take. Whispers from AP European history seniors around the hall all talk about John Roshone ‘99, the instructor of these classes.

Roshone has been teaching for 17 years which can be seen in his teaching style.

“Mr. Roshone is strict and kind of scary, but he’s a really good teacher,” Marc Fayad ‘22 said. “His class is difficult, but he gives you everything you need to do well.”

Roshone’s intimidating nature is well-known among any student who has taken his class. This nature keeps every class in control and focused on learning while also fostering responsibility and respect.

“I remember all the times I would forget to print something off for class and just walk in late with the paper printed, terrified that I’d get yelled at,” Michael Oehler ‘21 said. “I learned that I had to be more responsible, and I wanted to be better because that’s just the kind of teacher he is.” 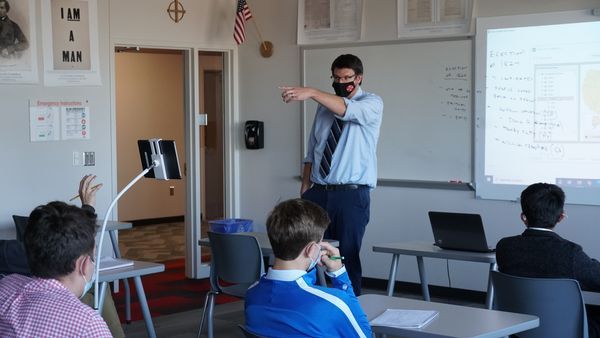 John Roshone ’99 calls on a student in American History class. Roshone has been teaching history at Mount Michael for 17 years.

“He’s one of the best teachers I’ve ever had,”  Oehler said. “Even though he’s intimidating, that kept me focused because I knew I didn’t want to be caught not paying attention.”

Beyond teaching a variety of history classes, Roshone serves as the head of the history department. However, Roshone was not always a history teacher.

“I started college wanting to be an engineer, but about halfway through, I realized that I just couldn’t see myself being an engineer, so I decided to get a teaching degree and split between math and history,” said Roshone.

Roshone thought that he would most likely end up being a math teacher,  but his love for history fueled the hope that a job would open up, and that’s exactly what happened.

He taught math for a few years, and then a job in teaching history opened up, and he has been teaching that ever since.

Roshone has dedicated his entire career to teaching in the school he attended as a high schooler, influencing countless students. With all of the experience, his philosophy has not fluctuated.

“No matter how much the physical changes, from changing buildings to technology advancing, it still all comes down to the student-teacher relationship,” Roshone said.