Knight Testifies To The Need For Scholarship Tax Credits 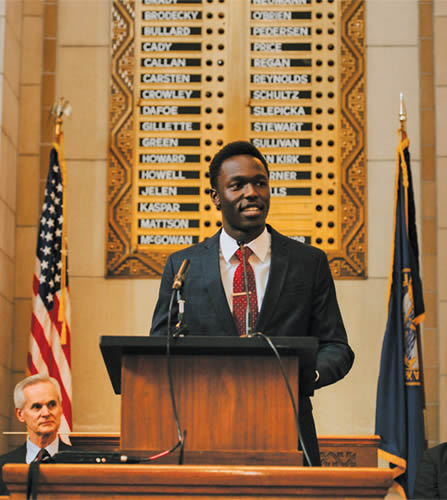 Excerpts from the Catholic Voice: February 18, 2021 by Susan Szalewski

Jacob Idra, a South Sudanese immigrant who graduated from Mount Michael Benedictine School in Elkhorn, is a Creighton University student who sees his future in finance. But he’s also studying African history and theology.

“The more I tell my story, the more I realize that it’s not about me,” said Idra, who testified on behalf of LB364, the Opportunity Scholarships Act, at a Jan. 28 hearing before the Legislature’s Revenue Committee. “It’s about future students.”

“I’ve been very blessed,” he acknowledged. His family had the help of the Children’s Scholarship Fund when he was a student at All Saints School in Omaha, and other scholarships helped his family afford his high school education at Mount Michael.

“This bill is a very selfless bill,” Idra said of LB364, introduced by Sen. Lou Ann Linehan of Elkhorn on Jan. 13. “You have to look beyond yourself and see kids in your neighborhood and in your city who don’t have the same opportunities.”