Mount Michael’s newest dean, Cade Johnson ‘17, introduced and hosted a brand-new club for the spring and winter seasons. Johnson put together a powerlifting team for anyone to join and is already getting started. There are currently six members participating in the club and hopefully more to come. It is always open for anyone to join at any time.

Johnson did not participate on a powerlifting team in high school, which is part of the reason he wanted to form one. 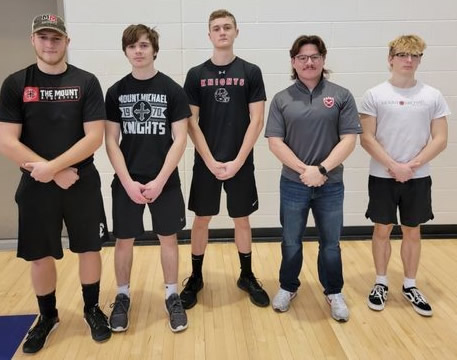 “If there was a team when I was here at Mount Michael, I would have been on it,” Johnson said. “I made the club because there wasn’t one already, and I want to make stronger individuals.”

Johnson prepared and organized everything to get the club to work so Mount Michael students could participate in competitions.

“Coach Johnson did the work to get this going,” Athletic Director Derrik Spooner said. “He was the one who had the idea and the plan. He is very motivated.” Spooner added that “Powerlifting is not a sanctioned NSAA sport.”

Competition-style lifts are controlled and focus on training for a single repetition. The lifts require a certain technique and training that Johnson provides.

“Our new training for powerlifting revolves around the three main lifts: bench, squat and deadlift,” club member Lane Schroeder ‘23 said. “So every other day we will focus on muscle groups pertaining to those exercises.”

New training is something the members must get used to so they can be successful because it is a new way of thinking about lifting. Most of the participants have been training for sports or personal physique, and now they are training for a single controlled lift.

Johnson wants to give students an opportunity to get away from school with his new club. It is relaxed, and it helps the students get away for a couple of hours a day. Johnson hopes more people join the club and plans to keep it going.

“I believe physical activity is important for high school students, especially at Mount Michael, because of the challenging school work,” Johnson said.  “This time [practicing lifting] gives students a chance to relieve stress and take a little time away from school work to recollect themselves, like moderation.”

There are two scheduled meets this year on Dec. 4, 2021, and Feb. 12, 2022, both at Creighton Prep consisting of three lifts per person. Each contestant gets three attempts on each lift  including squat, deadlift and bench. Practices are on Monday and Wednesday, and the student’s choice between Thursday and Friday. “I am excited to see the kids compete against other high schoolers,” Johnson said. “I believe the team will perform well. I expect that everyone gives it their all and has fun!”