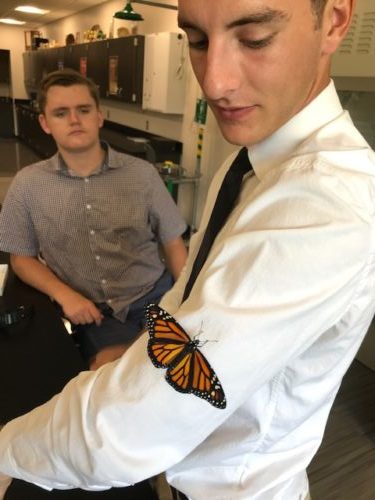 Applied Biology/Chemistry students started the school year by conducting a research project with Monarch Butterflies. Groups of students were given monarch eggs early in the school year and were assigned the task of determining the growth rate of their monarch caterpillars.  The eggs quickly hatched into caterpillars and students were responsible for feeding and taking care of caterpillars as well as carefully measuring and recording their growth rate. All data was compiled into spreadsheets allowing students to analyze the results. After about two weeks all the caterpillars had pupated and have since emerged as adult butterflies.  Students released all adults as they emerged and it is hoped they are well on their way to Mexico. Students were responsible for making several graphs and histograms to interpret the data. In total, twenty-four monarchs were raised and released. Student data is available at the following website:  Go to Project Site