Across the sea, 4,650 miles away. That is where the rest of the Storch family was, separated from their sons Dane Storch ‘21 and Jude Storch ‘23 by the Atlantic Ocean. However, this changed as the family became whole in late January after their move to Omaha was complete.

Lieutenant Colonel Steve Storch, a member of the Air Force, lived in Kaiserslautern, Germany with the rest of the Storch family: wife, Michelle, daughters Katharina and Marlee, and son Cole. After nearly four years of living in Germany, the family re­turned to Nebraska.

“The possibility of moving [to Ne­braska] has always been there. We only stay two or three years in one place, then move to another, except for Germany,” Dane said. “We were there for three and a half to four years because we got a six month exten­sion.”

Due to the nature of Steve’s service, relocation has been common for the family. They have lived in a variety of places, including Utah, Virginia, Ne­braska, Turkey, and Germany. 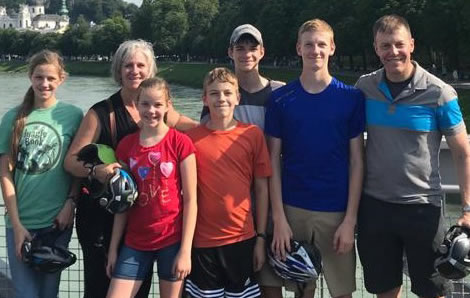 The Storch family takes a break from a bike ride in Europe.

“My dad joined the Air Force after he graduated from the University of Wisconsin and moved to a bunch of different countries. After he met my mom, their first assignment was to Turkey,” Dane said.

Steve primarily focuses on flight simulations, but before that he was a meteorologist.

“He works with several other coun­tries in NATO right now to develop weather simulations so that they can incorporate real-time weather into their pilot training and simulations,” Dane said.

Despite living in a different coun­try, the Storch brothers’ previous edu­cation was not unlike a typical Amer­ican education, although they were still immersed in German culture.

“In Germany we went to school in the military base, but we lived off it. It was a pretty normal school, but it was government funded by DoDEA, the Department of Defence Education Activity,” Jude said.

After the end of Steve’s current assignment, the family has been al­located to a new location where he will continue his work. Despite the irregularity, the reassignment process is not completely random, as service members can express a preference for a location.

“In the Air Force, you have a few options and you get to put in where you want to go. It doesn’t always get approved, but, in this case, they said, ‘Yeah, you can go back to Omaha,’” Dane said.

With both Dane and Jude current­ly in attendance at Mount Michael, the decision to return to Nebraska seemed logical.

“We kinda figured we would move back to Nebraska, but we didn’t know for sure until a few months ago,” Jude said.

After the move is complete, Steve will likely finish out his final assign­ment before retiring.

“They’re going to move here for the last assignment, and he’s either going to retire here in Omaha and live here a few years, or my mom could get a job teaching in DoDEA,” Dane said. “That way they could live in Germany or in Europe as long as they wanted.”

Even with the chance to finally re­unite the whole family, Michelle re­flects on their time in Germany with fondness.

“It is quite bittersweet leaving Ger­many and returning to Nebraska,” she said. “We have been so truly blessed to have spent the past three and a half years enjoying the German culture of simplicity, European Catholic culture, green programs and lifestyles, Fests, Christmas Markets, delicious food, Autobahn drives, church bells, won­derful people, and opportunities to travel all over the world.”

Despite a life that seems hectic to many, Dane is used to it. The constant moves feel almost normal to him.

“When I was little I thought, ‘Oh, people just stay here in one place for their entire life? Sounds kinda bor­ing,’” he said.

Following what may potentially be the family’s last move, Michelle is ea­ger to begin a new chapter, reconnect­ed with her family once again.

“While we have enjoyed every minute of living a German life, we are excited to get back to Omaha, our two oldest boys, and become an integral part of Mount Michael and our community,” she said.