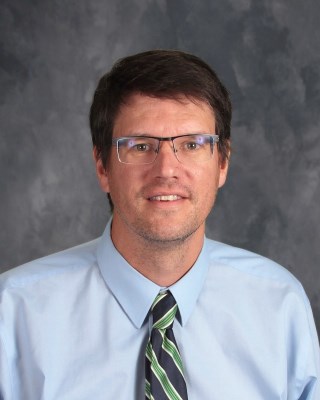 Head of School Dave Peters said as a teacher and as a coach “John exemplifies what we want all students in Catholic school to achieve: an education that impacts them in the faith and in their professional and personal lives.” A 1999 graduate of Mount Michael and a faculty member since 2004, John said he is “so grateful that I can give back to the school that gave me so much.”

Students describe John as a tough, yet gifted teacher who makes history come to life. “His unique, interactive teaching style is second to none,”
said former student Jacob ldra. “Effortlessly, he demands every student’s attention as he eloquently turns history lessons into riveting stories.”
Former student, Temilolowa Adeyemo, agreed. “Mr. Roshone is the most passionate, caring and effective teacher that I have had, both in high school and at Stanford University,” he said. “He opened my eyes to the joys of history, showing me that learning about the past can be the most efficient way to build a sustainable future.”

John especially enjoys helping run the junior retreat because it gives him an opportunity to share his faith and experiences not only as a teacher but as a husband and a father. “Hopefully in my years at Mount Michael I have acted as a role model for them and someone they can emulate.”

“One of the biggest impacts John has on Mount Michael students, all of whom are boys, is that he exemplifies how to be a man. He shows that he is caring, assertive as a leader, and puts his faith and family first,” said Matt Coghill, former student and current student teacher.

John has a bachelor’s in secondary education and a master’s in history from University of Nebraska at Omaha. He and his wife, Katy, have three children­-Charlotte, Daniel and Elizabeth-who all attend St. Bernard School.