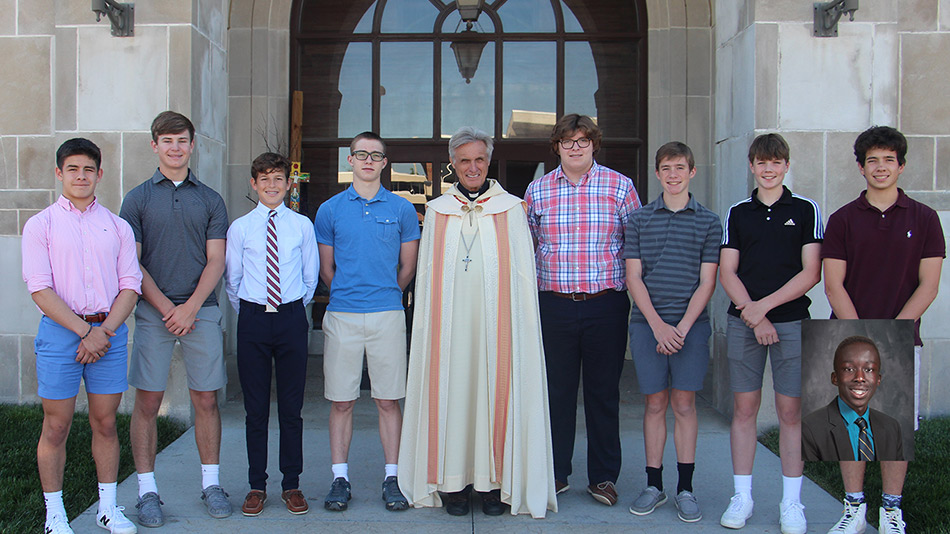 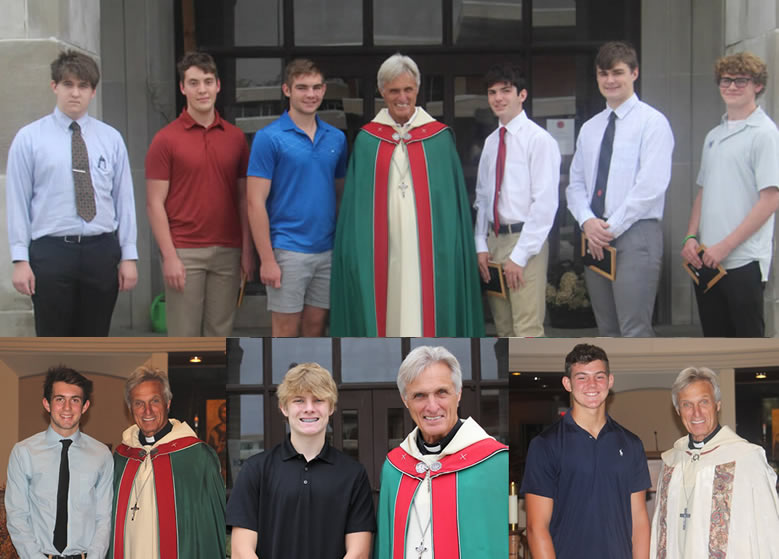 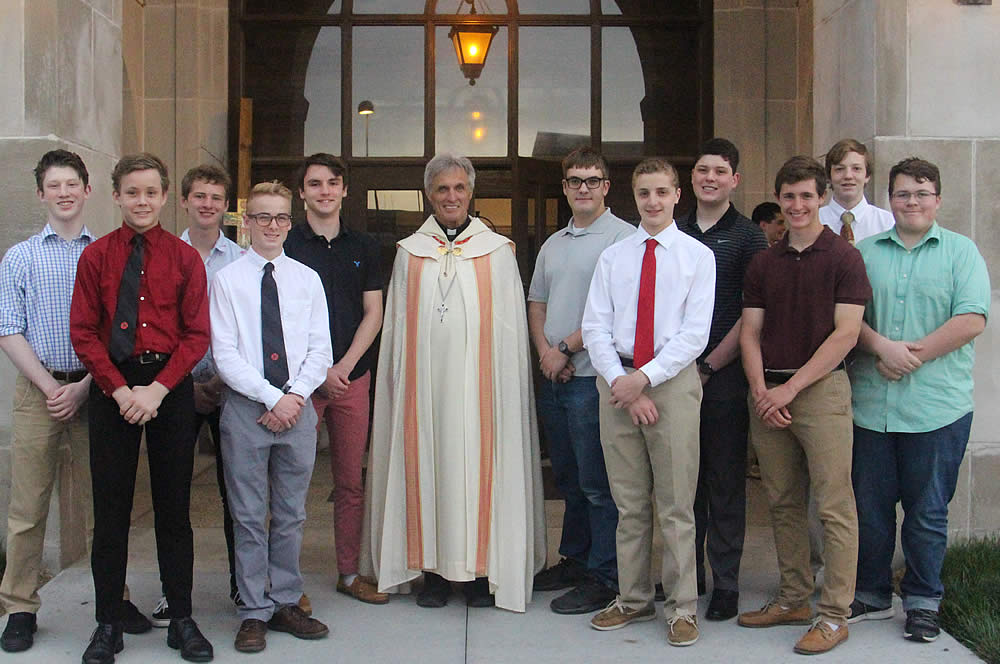 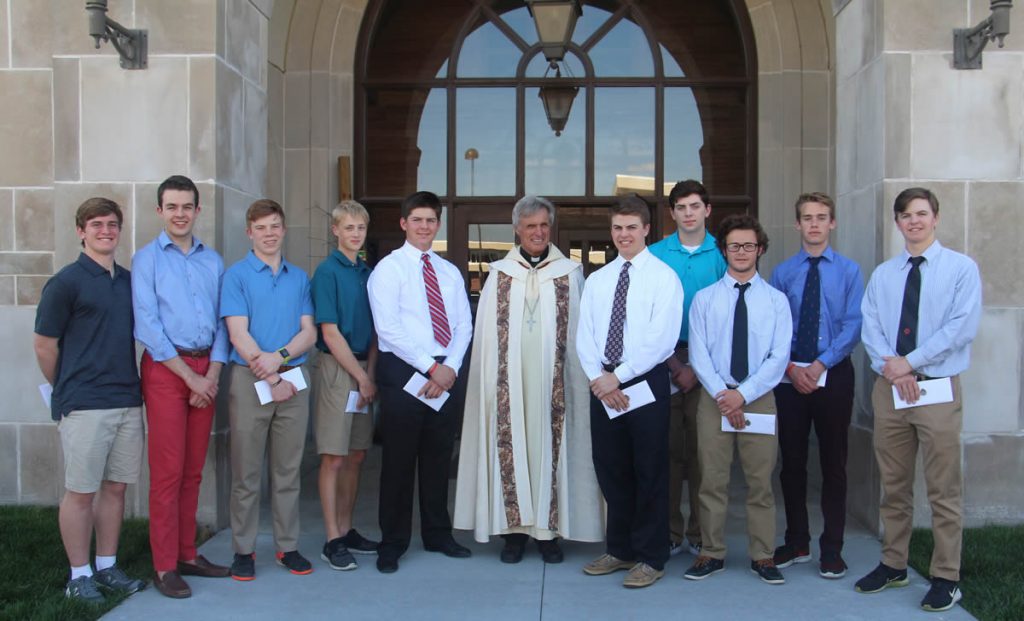 Students of Mount Michael have an opportunity to pray in smaller groups outside the times of the Eucharist or required times of worship. Those students who choose to do so are called: Men of Benedict. Any student may be a part of this group. However within this group, there are some students who wish to be more involved in Benedictine Spirituality. To provide this deeper involvement, Mount Michael has set up a chapter of Student Oblates. In Benedictine circles throughout the world, the Oblate program is one of the fastest growing groups in Benedictine communities. One Mount Michael student once said: “It is a way to be a monk without actually being a monk.”

Mount Michael opened this chapter again for its students in 2017. It, too, seems to be growing rapidly as well.

For more information about what an oblate is, there is more information on the abbey website of Mount Michael. Br. Jerome Kmiecik OSB is presently the Oblate Director and the adult group is experiencing much growth as well. Mount Michael encourages parents of students to join the adult oblate group so that they are in sync with their own sons.

“From my first day at Mount Michael I was interested in the Rule of St. Benedict, the founding document of Benedictine monasticism. Through the Oblate program I grew to appreciate the depth of this short book and how it is still being applied to our understanding of living in community and managing people. |

One of my favorite Oblate practices is Lectio meditation. Mindfully reading a passage of scripture gives me the deliberateness I need to more completely examine and connect with the message. I see God’s presence in the words and phrases that catch my attention, and the format of Lectio gives me time to contemplate their significance. My personal silent meditation practice is strengthened by this scripture-focused process. As Bro. Jerome often says, Lectio helps us, “listen with the ear of the heart.”

I just finished my first semester of my first-year at Tufts University in Boston. I was appointed by the Protestant Chaplain to the University Chaplaincy Inter-faith Student Council, where I’m working with students across faith traditions in coordinating on-campus events and interfaith awareness.

A final connection spanning Mount Michael and Tufts is the mission statements of both institutions. The motto of the Benedictine Confederation–the governing body of the Rule of St. Benedict–is “Pax,” or peace. Tuft’s motto is “Pax et Lux,” or peace and light. With Mount Michael serving as my peaceful foundation, I’m continuing to discern the light at Tufts.”

My interest in oblation started in chapel last year when we prayed the vocational prayer and we said “as monks and oblates of this house.” I then looked up what oblates were on the Mount Michael website and was interested because it could also give me insight into monastic life as a student. This year I came to the first meeting of the youth group: Men of Benedict (it was led by Br. August last year) and Fr. John and Br. Jerome explained more to us about what oblates were and said that if we wanted, we could become oblates. I instantly knew I wanted to become an oblate and stuck with it.

I love being able to come to our group’s meetings and pray with Fr. John, Br. Jerome, my classmates, and every so often the monastic community. I especially love praying vespers. The whole community singing in prayer is beautiful. I also really like lectio because with school stressing me out it’s the best way to relax and calm down.

I hope to attract many of my classmates to the school’s oblate group. I hope that I can not only get very religious people to join but also those who aren’t as active in their faith. I also hope to attract “cool kids” because then many more will want to join (ice cream works every time). Being an oblate would help a lot of these classmates cherish and stick with their faith at the time that they normally wouldn’t. 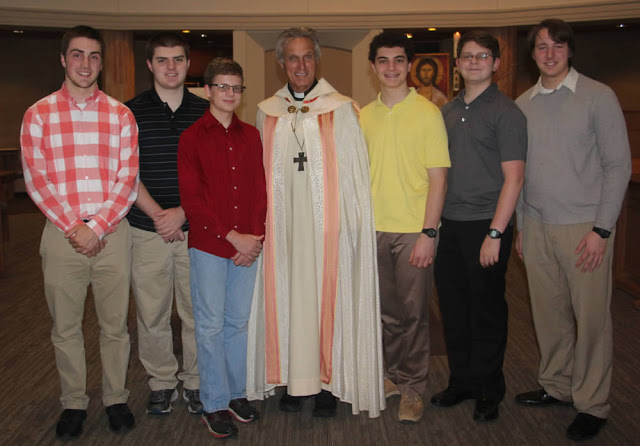 I sort of just went to the first meeting. This was when I learned that oblates were even a thing. Whenever we would say the vocation prayer on Monday morning and we would get to the part where we say, “monks and oblates,” I always thought I was saying monasenablés, and it was a weird foreign word.

I find lectio to be a great way to at least let God say His two cents to me. I often don’t give Him time to respond to me in my prayers.

I hope that the student oblate program becomes a regularity of Mount Michael.

My path to becoming an oblate started when Brother Jerome and Father John had the first Men of Benedict meeting of the year in September. Brother Jerome and Father John were taking the program in a new direction, so instead of just showing the students monastic life, we could really become involved. The end goal for the year was to become and oblate of Mount Michael abbey. And so, over the next eight months, five other students and I prayed lectio divina, sang vespers with the monks, and learned the Rule of Benedict to a greater degree. Around the start of May, Brother Jerome asked us if we were going to take oblation at the end of the year. Tentatively I said yes. I didn’t really have a reason as to why I said yes other than I thought it would be cool to be an oblate. I took my oblation with the other five students and took the name Romanus. It didn’t really sink in as to how I was now a part of the community until Brother Jerome called me Brother Romanus.

When we started the program, I was of the understanding that being an oblate is kind of being tacked onto the monastery. But when Brother Jerome called me Brother Romanus, the scales fell from my eyes. It hit me that being an oblate really means that you are a member of the community, monk or not, catholic or not. It’s like being a brother or sister of the abbey. This was the thing for me that made me very satisfied in my yes. Being a part of the community and being like a brother to the abbey was a glorious thing to me. I hope that there are many more oblates in the future, and that some of them even become monks of the abbey. God bless all!