Students play out passion for basketball in parish league

Swish. Swish. Two basketball players from Mount Michael drill consecutive shots, get­ting looks of approval from other players as they join them at half­court. However, the logo at halfcourt is not the red circle surrounding a black Benedictine cross, and the other players are nowhere near their age.

Instead, those two players, Michael Kremer ‘20 and Cole Cordes ‘20, are approaching a group of men aged 30-51 standing on top of a green capital A with a yellow halo. This is not a high school game; it is the Sun­day night basketball league at St. Patrick’s Catholic Church in Elkhorn, which both Kremer and Cordes attend.

“Cole texted me and told me to come one night,” Kremer said. “It’s just a fun thing to do.” 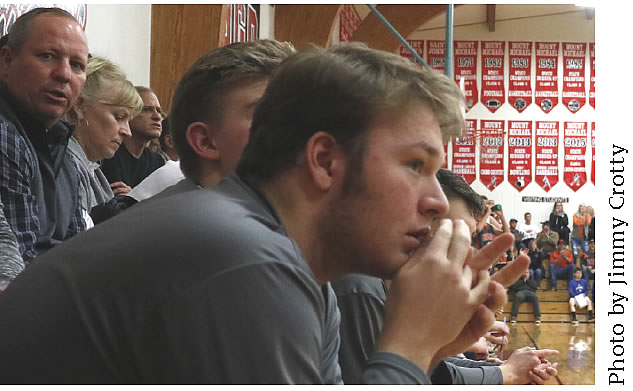 Cole Cordes ‘20 watches basketball team last year. After struggling with injuries, Cordes decided to stop playing on the high school team and instead play in the parish league at St. Patrick’s in Elkhorn.

The rules of the league are simple. The first ten players to make a certain shot start the night playing, while the rest switch in periodically throughout the evening. The games are played to 15, counting twos and threes, and games must be won by at least three points.

The league was started 10 years ago by St. Patrick’s parishioner Todd Parr, and Cordes has played in it since it began..

“When I was younger and they didn’t have enough players, I would fill in,” Cordes said. “My dad was always there.”

While Cordes did take a three year break from the league in order to play basketball in high school, back injuries and talented underclassmen forced him to turn to his old stomping grounds to keep playing basketball. Injuries also caused Kremer to turn to the league.

“Sophomore year I hurt myself and I couldn’t play sports the entire year,” Kremer said. “Not only was I a year be­hind everyone else, but we had a good ju­nior class. I realized I didn’t have a start­ing spot ahead of me.”

Even though both Cordes and Kremer are young and have recently played com­petitive high school basketball, neither views themself as the league’s best player.

“There’s one guy, Joel, who’s about 30 and jacked, who definitely played college basketball,” Cordes said. “Another guy, JJ, is about 35 to 40, and has the nicest jump­er I’ve seen in a long time. He doesn’t miss anywhere inside the black line.”

Those two players are part of the rea­son the league is more intense than it would seem.

“Even for a parish league, it’s still pret­ty serious,” Kremer said. “The dads take it super serious. There’s a lot of communi­cation going on in the games.”