Congratulations to Tom Swanson who was recently named the new head baseball coach for Mount Michael. 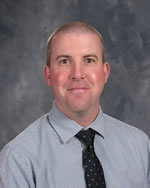 Coach Swanson is a 2001 graduate of Mount Michael where he was a part of the American Legion baseball team for 5 years. While attending college at UNO, he was an assistant coach in the baseball program for three years before coaching one year at Omaha Benson, and eight years as the head coach of the Alliance, NE baseball program. Coach Swanson returned to Mount Michael in 2015 and has taught World History and European History while working as an assistant coach with the cross country and baseball teams.