Ever since a majority of classes moved into the Sokol Building, the Benedict Building has undergone constant upgrades. New football lockers and cafeteria space were both appreciated upgrades to the Benedict building. Now, yet another useful addition is being added in the form of wrestling lockers.

“The space recently became available to us, and I wanted an area that the wrestling team could call our own,” head wrestling coach Bob Sullivan said. 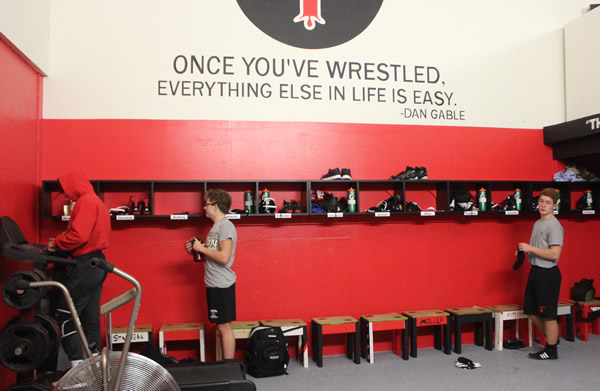 For years, the wrestling team has sat on the floor on the side of the mats to prepare for practice. It was never really a problem for the students; however, the change is appreciated by the wrestlers who now have a more official space to do work in.

The new space is already being used by the wrestling team, which is busy with fall workouts, equipment pickup, and new exercises and activities together for team building.

One of the new team building exercises is happening already. In this exercise, students painted stools they made over the summer and branded them with actual cattle brands to put in the new room.

The new room has served to unite the team and brought them closer together before the season even started. With the students having painted the stools and lockers they built over the summer, now every wrestler is involved with the team.

“I’ve gotten to know a lot of people just by asking for a paintbrush or something while painting,” John Balch ‘23 said.

With all this coming, many assumed it would add expenses onto an already costly couple of years, but the budget has not been a problem.

“[The rooms] essentially don’t cost very much. It’s just a lot of paint and some wood,” Sullivan said.

In addition, it was constructed in an old storage room left after the wrestling team cleaned it out of old stuff last year and was built by generous amounts of volunteer hours and determined coaches working over the summer and fall. The team is already growing closer and working together on the upcoming season.

“I think it brought the freshman in and brings us together as a team, even though we are only in preseason,” Detwiler said.